VDA design – One of the tasks of a Citrix Architect is VDA design. There are many considerations, including the following:

Non-persistent VDAs – Probably the easiest of these desktop-management technologies is non-persistence. That’s because you install your applications once into a master image, and you can easily create a pool of identical machines based on that master image. Whenever an update is needed, you install the update once into your master image and push it out.

However, there are several drawbacks to non-persistence:

Application Integration Technologies – Additional technologies can be used to overcome some of the drawbacks of non-persistent machines:

The alternative to zones is to build a separate site/farm in each datacenter, and use StoreFront to aggregate the published icons. Here are benefits of multiple sites/farms as compared to zones:

Here are some general design suggestions for Citrix Virtual Apps and Desktops (CVAD) in multiple datacenters:

Create Zones – This section details how to create zones and put resources in those zones. In 7.9 and older, there’s no way to select a zone when connecting. In 7.11 and newer, NetScaler and StoreFront can now specify a zone and VDAs from that zone will be chosen. See Zone Preference for details.

There is no SQL in Satellite zones. Instead, Controllers in Satellite zones connect to SQL in Primary zone. Here are tested requirements for remote SQL connectivity. You can also set HKLM\Software\Citrix\DesktopServer\ThrottledRequestAddressMaxConcurrentTransactions to throttle launches at the Satellite zone. 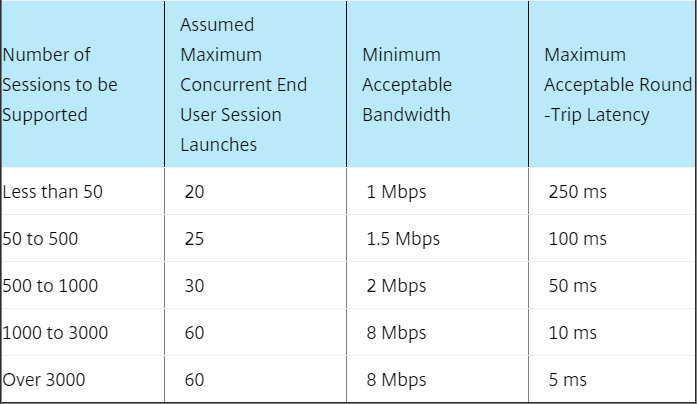 From Mayunk Jain: “I guess we can summarize the guidance from this post as follows: the best practice guidance has been to recommend a datacenter for each continental area. A typical intra-continental latency is about 45ms. As these numbers show, in those conditions the system can handle 10,000 session launch requests in just under 20 minutes, at a concurrency rate of 36 requests.”

The following items can be moved into a satellite zone:

Do the following to create a zone and move items into the zone:

Citrix Virtual Apps and Desktops (CVAD) and XenApp/XenDesktop 7.11 and newer have Zone Preference, which means NetScaler ADC (11.0 build 65 and newer) and StoreFront (3.7 and newer) can request Delivery Controller to provide a VDA in a specific zone.

In Citrix Virtual Apps and Desktops (CVAD) and XenApp/XenDesktop 7.11 and newer, for dedicated (persistent) Desktop OS (aka Single session OS) Catalogs, MCS can create Full Clones instead of Linked Clones. Linked Clones can’t be moved, but Full Clones are regular virtual machines that can be moved without impacting MCS.

In XenApp/XenDesktop 7.9 and earlier, persistent Linked Clones are created by selecting Yes, create a dedicated virtual machine in the Create Catalog wizard. Please, never do this in 7.9 or earlier, since you can’t move the machines once they’re created. 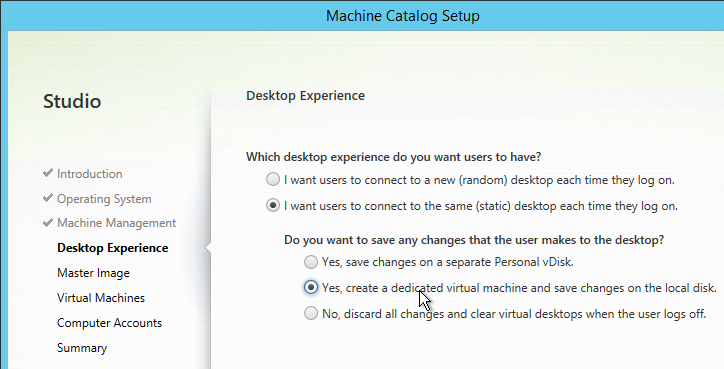 A much better option in 7.9 and earlier is to use vCenter to create Full Clones of a template Virtual Machine. Then when creating a Catalog, select Another service or technology (Manual Catalog) to add the VMs that have already been built. 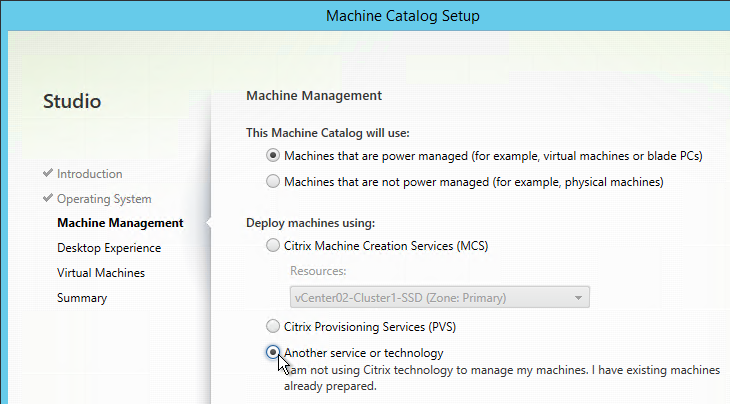 In Citrix Virtual Apps and Desktops (CVAD) and XenApp/XenDesktop 7.11 and newer, you can use MCS to create Full Clones. Full Clones are a full copy of a template (master) virtual machine. The Full Clone can then be moved to a different datastore (including Storage vMotion), different cluster, or even different vCenter. You can’t do that with Linked Clones.

For Full Clones, simply prepare a Master Image like normal. There are no special requirements. There’s no need to create Customization Specifications in vCenter since Sysprep is not used. Instead, MCS uses its identity technology to change the identity of the Full Clone. That means every Full Clone has two disks: one for the actual VM, and one for identity (machine name, machine password, etc).

In Citrix Virtual Apps and Desktops (CVAD) and XenApp/XenDesktop 7.11 and newer, during the Create Catalog wizard, if you select Yes, create a dedicated virtual machine…

After you select the master image, there’s a new option for Use full copy for better data recovery and migration support. This is the option you want. The Use fast clone option is the older, not recommended, option. 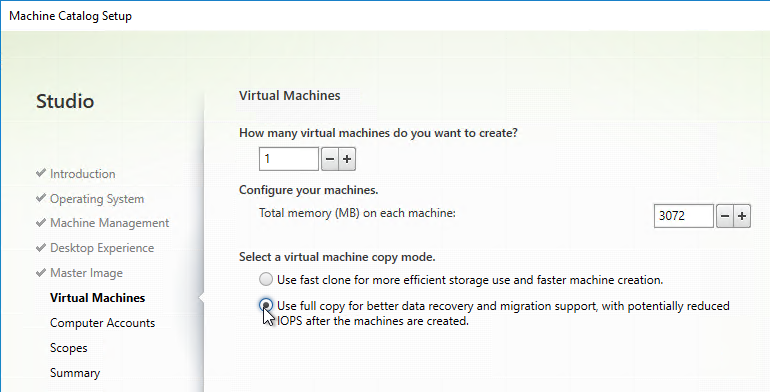 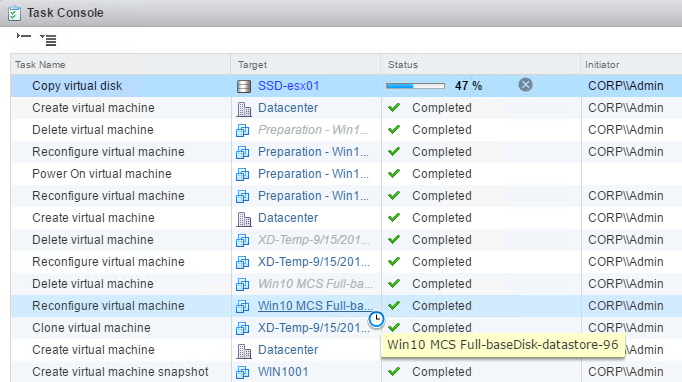 When you add machines to the MCS Full Clone Catalog, it uses the Master Image snapshot selected when you initially ran the Create Catalog Wizard. There is no function in Citrix Studio to change the Master Image. Instead, use the PowerShell commands detailed at CTX129205 How to Update Master Image for Dedicated and Pooled Machine Types using PowerShell SDK Console. 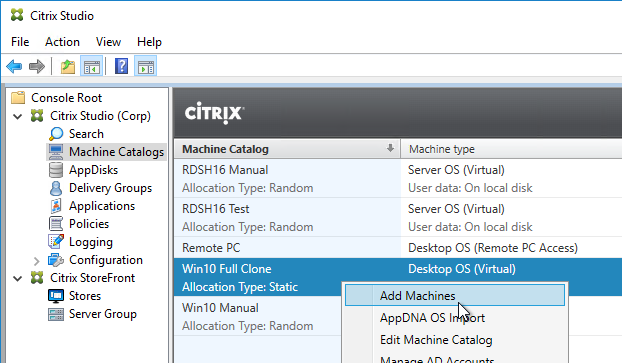 Since these are Full Clones, once they are created, you can do things like Storage vMotion. 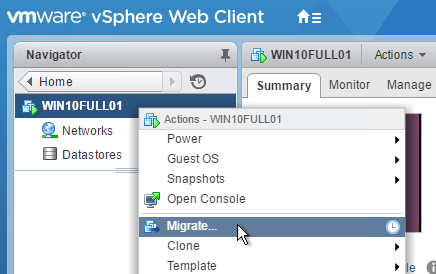 During Disaster Recovery, restore the Full Clone virtual machine (both disks). You might have to remove any Custom Attributes on the machine, especially the XdConfig attribute. 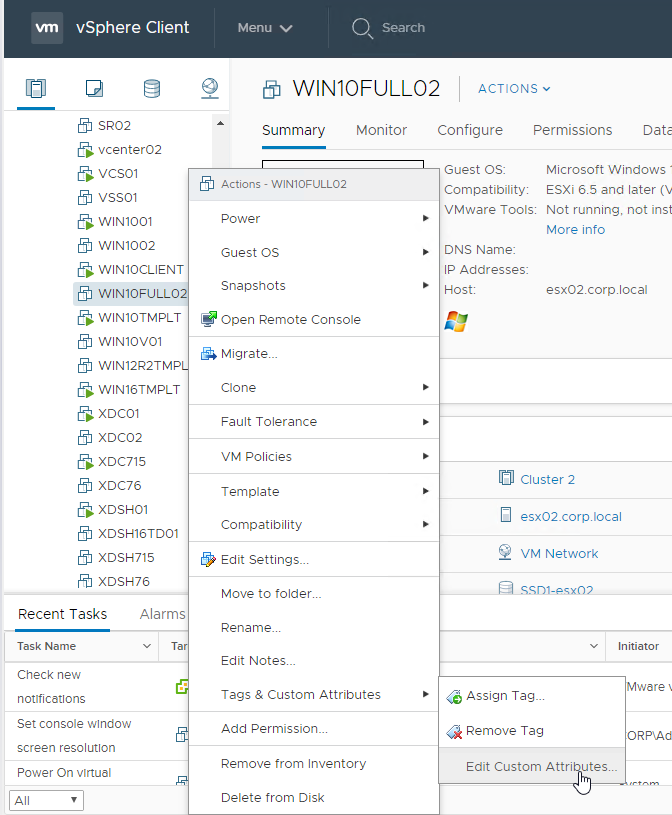 Inside the virtual machines, you might have to change the ListOfDDCs registry value to point to your DR Delivery Controllers. One method is to use Group Policy Preferences Registry. 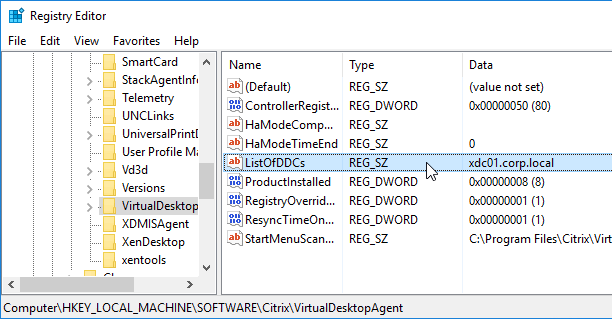 In the Create Catalog wizard, select Another Service or technology. 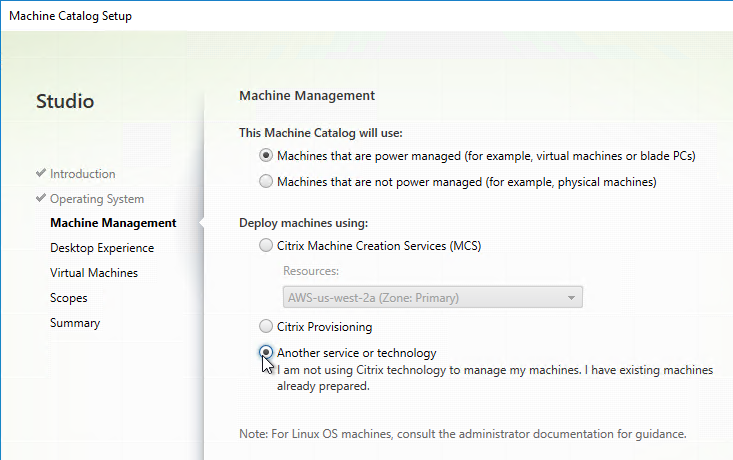 And use the Add VMs button to add the Full Clone machines. The remaining Catalog and Delivery Group steps are performed normally. 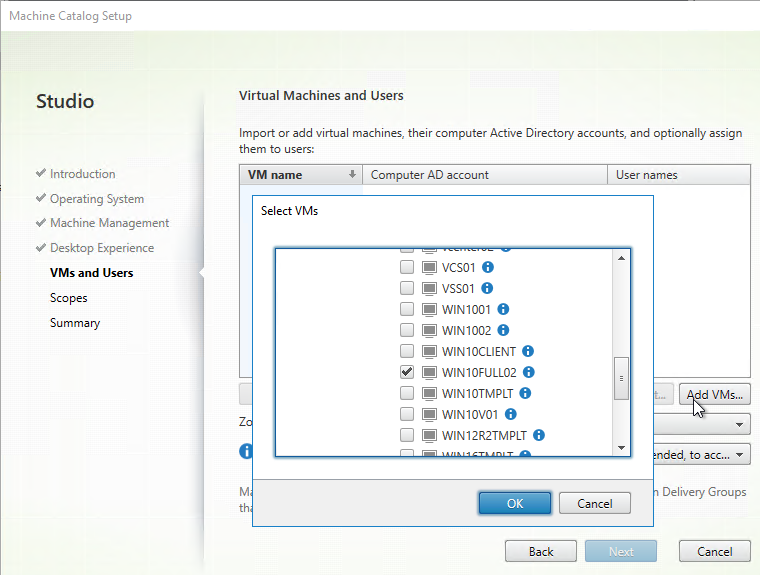 Once a Catalog is created, you can run the following commands to specify the starting count:

Memory caching (aka MCSIO, aka Storage Optimization) in MCS is very similar to Memory caching in Citrix Provisioning. All writes are cached to memory instead of written to disk. With memory caching, some benchmarks show 95% reduction in IOPS.

In CVAD 1903 and newer, MCS now uses the exact same Memory Caching driver as Citrix Provisioning. If you want to use the MCSIO feature, upgrade to CVAD 1903 or newer. Older versions of CVAD, including 7.15, have performance problems.

Here are some notes:

When installing the VDA software, on the Features page, make sure you select the MCS IO option. VDA 1903 and newer are the recommended versions. 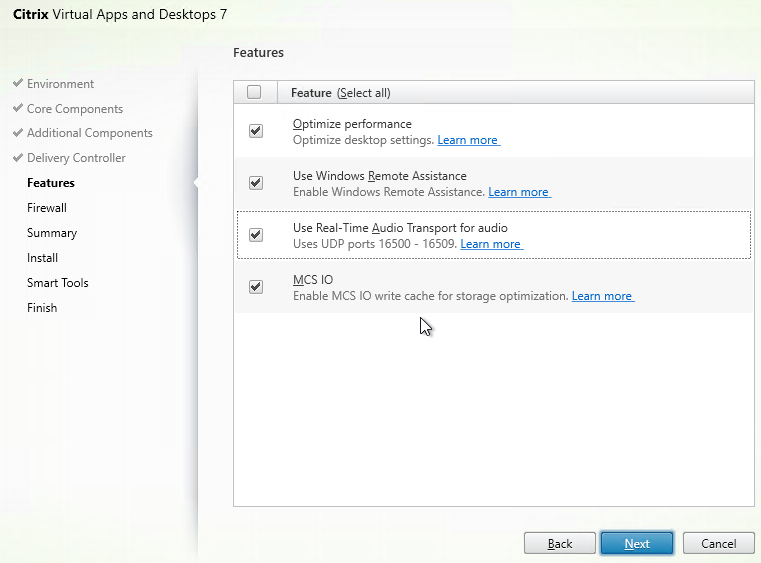 To create a new Hosting Resource:

Or you can edit an existing Hosting Resource:

Memory caching is enabled when creating a new Catalog. You can’t enable it on existing Catalogs. Also, no AppDisks.

When a Machine Creation Services catalog is created or updated, a snapshot of the master image is copied to each LUN. This Replica is then powered on and a few tasks are performed like KMS rearm.

From Citrix Blog Post Machine Creation Service: Image Preparation Overview and Fault-Finding and CTX217456 Updating a Catalog Fails During Image Preparation: if you are creating a new Catalog, here are some PowerShell commands to control what Image Prep does: (run asnp citrix.* first). These commands do not affect existing Catalogs.

If you are troubleshooting an existing Catalog, here are some PowerShell commands to control what Image Prep does: (run asnp citrix.* first)

If multiple excluded steps, separate them by commas: -Value "OsRearm,OfficeRearm"

A common issue with Image Prep is Rearm. Instead of the commands shown above, you can set the following registry key on the master VDA to disable rearm. See Unable to create new catalog at Citrix Discussions.

From Mark Syms at Citrix Discussions: You can add one (or both) of the following MultiSZ registry values

The values are expected to be an executable or script (PoSh or bat), returning 0 on success

Citrix CTX140734 Error: “Preparation of the Master VM Image failed” when Creating MCS Catalog in XenApp or XenDesktop: To troubleshoot image prep failures, do the following:

The Disk Reaper interval is configured using PowerShell. The default values are shown below:

If you create a Machine Catalog of Dedicated Machines (aka Static Catalog), then it’s not possible to update the Master Image using Citrix Studio. 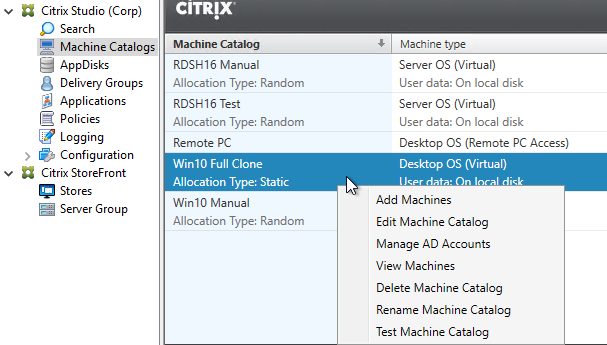 Official instructions are at CTX129205 How to Update Master Image for Dedicated and Pooled Machine Types using PowerShell SDK Console.

If vSphere, Chaitanya at Machine Catalog Update Tool at knowcitrix.com created a GUI for these Citrix and vSphere PowerShell commands. 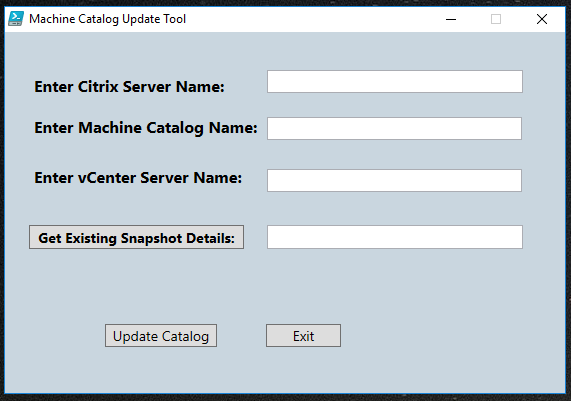 Citrix Virtual Apps and Desktops (CVAD) and XenApp/XenDesktop 7.14 and newer supports multiple license types (e.g. XenApp Concurrent and XenDesktop User/Device) within a Single farm/site. However, a farm/site only supports a single Edition (i.e. Enterprise or Platinum, but not both). The license model and product are configured at the Delivery Group. See CTX223926, and Multi-type licensing at Citrix Docs. 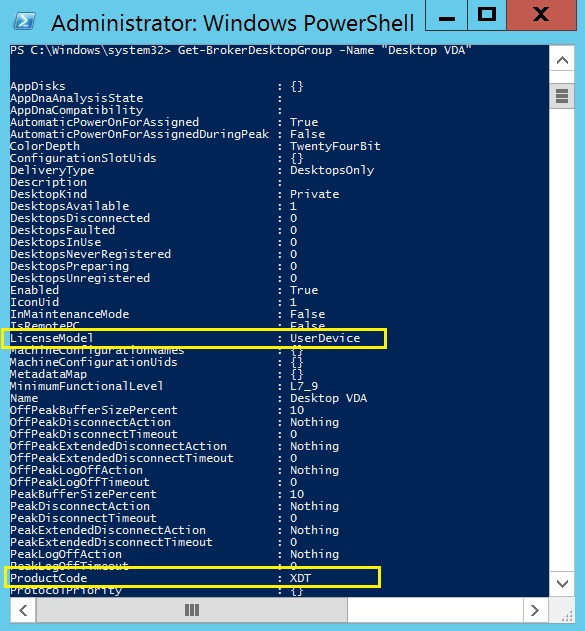 Delivery Groups in 7.8 and newer

In Citrix Virtual Apps and Desktops (CVAD) and XenApp/XenDesktop 7.8 and newer, when creating a Delivery Group, there are new options for publishing applications and publishing desktops.

On the Applications page of the Create Delivery Group wizard, From start menu reads icons from a machine in the Delivery Group and lets you select them. Manually lets you enter file path and other details manually. These are the same as in prior releases.

Existing is the new option. This lets you easily publish applications across multiple Delivery Groups. 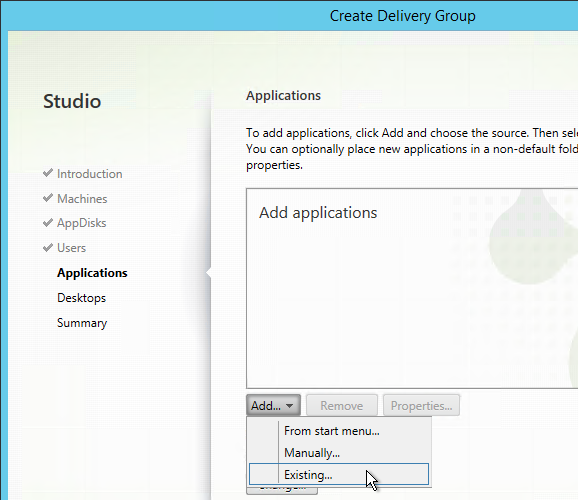 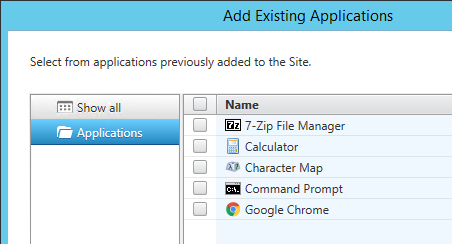 You can also go to the Applications node, edit an existing application, change to the Groups tab, and publish the existing app across additional Delivery Groups. 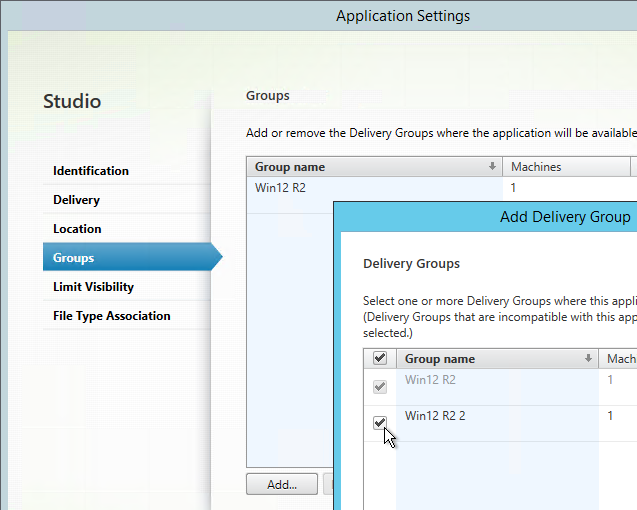 Once multiple Delivery Groups are selected, you can prioritize them by clicking the Edit Priority button. 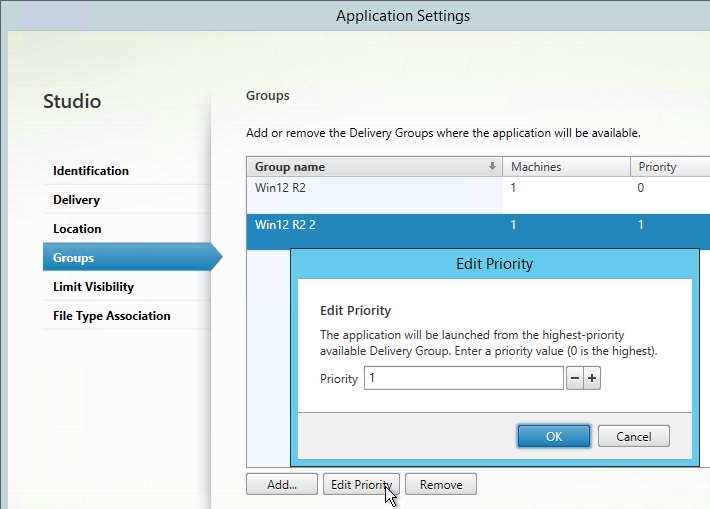 On the Desktops page of the Create Delivery Group wizard, you can now publish multiple desktops from a single Delivery Group. Each desktop can be named differently. And you can restrict access to the published desktop. 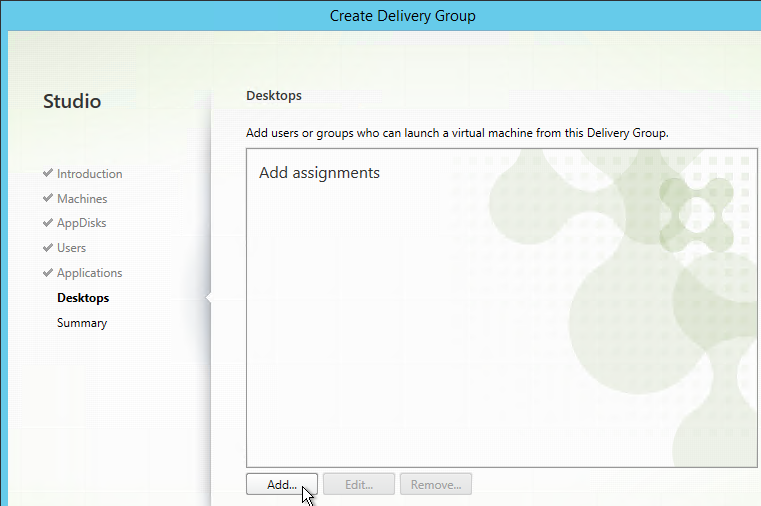 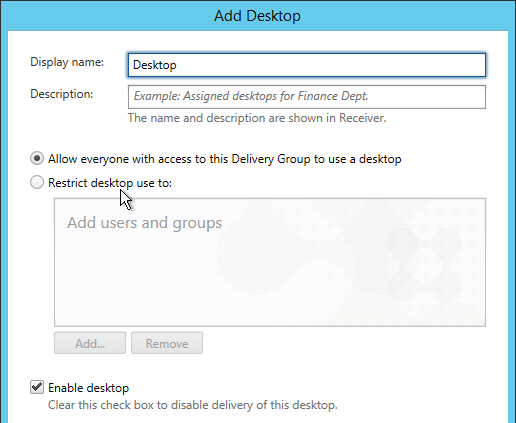 There doesn’t seem to be any way to publish a Desktop across multiple Delivery Groups.

To publish apps and desktops across a subset of machines in a Delivery Group, see Tags.

Citrix Virtual Apps and Desktops (CVAD) 1808 and newer lets you restrict the maximum instances of a published desktop in the Site. This feature is configured using PowerShell.

If too many instances are launched, the user sees Cannot start desktop in StoreFront.

To revert to unlimited instances of the published desktop, set MaxPerEntitlementInstances to 0.

In Citrix Virtual Apps and Desktops (CVAD) and XenApp/XenDesktop 7.12 and newer, you can assign tags to machines. Then you can publish apps and/or desktops to only those machines that have the tag. This means you can publish icons from a subset of the machines in the Delivery Group, just like you could in XenApp 6.5.

If you create a Scheduled Restart inside Citrix Studio, it applies to every machine in the Delivery Group. Alternatively, you can use the 7.12 tags feature to allow different machines to have different restart schedules.

To configure a scheduled reboot on RDSH machines:

Or use a reboot script/tool:

From Configure session roaming at Citrix Docs: By default, users can only have one session. On XenApp 7.6 (experimental support) and Citrix Virtual Apps and Desktops (CVAD) and XenApp 7.7+ (full support), you can configure SessionReconnection setting available via PowerShell.  On any Server OS delivery group, run:

For <Published Desktop Name>, run Get-BrokerEntitlementPolicyRule and look for the Name field.

For app sessions, use:

For <App Entitlement Rule Name>, run Get-BrokerAppEntitlementPolicyRule and look for the Name field.

It is sometimes useful (e.g. DR) to export machine assignments from one Catalog/Delivery Group and import to another.

From Adil Dean at Exporting Dededicated VDI machine names and user names from catalog in Xendesktop 7.x at Citrix Discussions: Hopefully this is what you are after, it turns out you don’t actually need PowerShell as the functionality is built into the tool.

Your clients will now have users re-assigned to machines.

Monitor the Number of Free Desktops

Sacha Thomet wrote a script at victim of a good reputation – Low free pooled XenDesktops that polls Director to determine the number of free desktops in a Delivery Group. If lower than the threshold, an email is sent.

CTP Kees Baggerman has a script at Making sure your Citrix Desktops are utilized with Powershell v2 that does the following: